SIR - I listened in disbelief to the radio as a Downing Street spokesman described windpower as a cost-effective energy source!

If this is true, then why is it necessary for this Government to subsidise the construction and operation of these wind turbines?

In 2009-10, wind energy companies received over £520 million in subsidies, which came not from a special government fund, but from a surcharge on our business and domestic electricity bills.

This Renewable Obligation Charge currently adds £26 to everyone’s annual electricity bill and this is predicted to increase to £50 by 2016.

There could well be good environmental reasons for supporting windpower development – but in truth I am not able to think of all that many. Let us, however, not kid ourselves that it is a cost-effective source of electrical energy.

Each will cost around £5 billion to construct and have the capacity to produce approximately 1,500 megawatts of electrical power.

If we are seeking a cost-effective investment then it is clear that the privately-financed Hinkley C nuclear power station has the edge over the Atlantic Array which will continue to require subsidies from electricity consumers. The answer is still not blowing in the wind even if the Downing Street spokesman is adding a puff!

Three in court after Ilfracombe drugs and cash seizure

North Devon Council ‘could run out of money’, warns head of resources 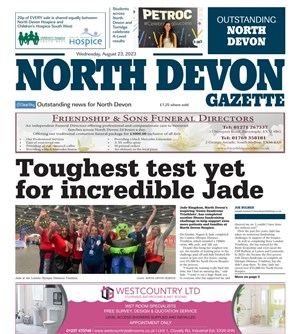